CryptoKitties is, at its heart, a breeding game. If you fancy yourself an explorer, you can breed any two cats together and wait to see what their child will look like.

But when you're trying to breed a specific Kitty, you need to be a little more like a scientist. So today we’re going to teach you how to breed a Fancy Cat with one sweet tooth.

We chased Miss Purrfect on Saturday, Feb 9, at 10 am PST. Now you have until February 14th at 11:59 PM PST to get your hands on this love muffin.

Every CryptoKitty has a set of genes. Some of them are visible, and we call them Cattributes. Some, like the secrets of true love, are hidden. When you breed two Kitties together, their children end up with a mix of different genes, in different (visible and hidden) positions.

To make a Miss Purrfect, you’ll need to create a kitten with a specific set of Cattributes. Simple so far!

The Cattributes you need for Miss Purrfect are:

Since those are all visible genes, it’s a pretty simple process to breed a Miss Purrfect!

You could just buy two Miss Purrfect Kitties and breed them together, which is the easiest way to get a new Miss Purrfect. But it’s not the most fun or challenging method, and it can be a little pricey. Instead, why not find two parents who have all the Cattributes you need between them, and pray to Cupid for a little luck!

Every cat has a certain percentage chance of passing its genes onto its offspring. The math can get pretty complicated, so we recommend CKBox to help you figure it out. It’s a Google Chrome extension that tells you the percentage chance each parent has to pass on each of their genes to their kitten.

If you don’t already own Kitties with the Cattributes you need, don’t worry! You can use the marketplace to find a Kitty with the right Cattributes, and then either buy that Kitty, or breed with it.

Our first step is to search our Kitties and the marketplace for Kitties that have any three or four of the five required traits. For example, you can buy one cat with allyouneed, butterscotch, asif.

Now we need a Kitty that at least has the satiated and flapflap Cattributes. You can buy this second cat, or you can find one for Sire on the Siring marketplace and breed with it. To maximize your chances of breeding Miss Purrfect, try to find a second cat that has a mix of some of the other Cattributes, too. For example, you could go for a satiated, flapflap, allyouneed, asif Kitty! 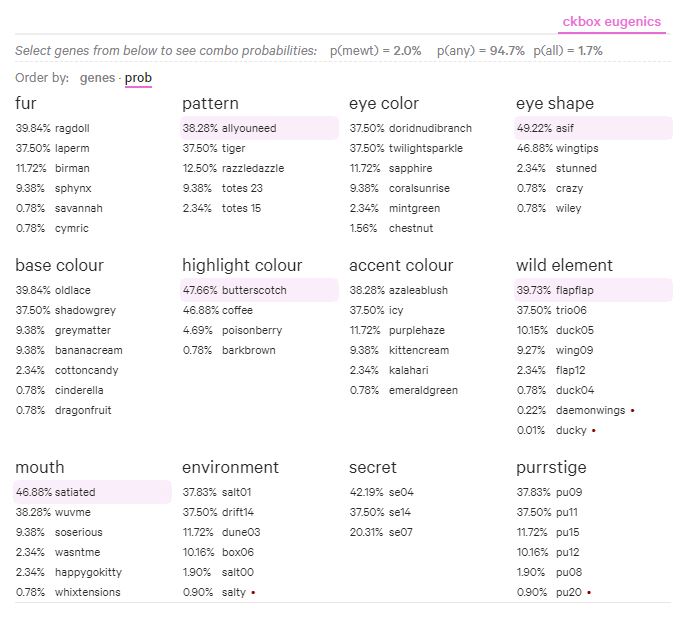 In the example above, we have just a 1.7% chance to hit all the traits needed for Miss Purrfect. It's not high, but we’re saying there’s a chance. And even if we don't breed our Fancy Cat this time, we might breed a Kitty that has three or four of the required traits, which we can then pair up to try and breed our target again.

Like finding true wuv, this’ll be a tough one

You may be aware that the Ethereum network is in the middle of an “Ice Age”. Thankfully it’ll be shorter than the one after the dinosaurs died, but it does mean everything is taking a little longer than usual.

Basically, a new block is normally created every 15 seconds, but a planned upgrade to the Ethereum network had to be delayed. Blocks are now taking about 17.5 seconds. That doesn’t seem like a very big difference (what’s 2.5 seconds between friends?), but it affects our cooldown speeds.

CryptoKitties assumes a 15 second blocks, so during the Ice Age our "24 hour" breed takes closer to 28 hours to complete.

Fortunately, the Ice Age is expected to be over by the end of February, but it means that breeding Miss Purrfect will take a little longer. Because this is a five trait Fancy, and you only have five and a half days to breed it, that little slow down could end up tripping you up. So make sure you have some speedy Kitties to deliver their offspring.

It often takes a bunch of breeds, or a lot of good luck, to breed a Fancy. But the more you do it, the better you get, because you'll have more Kitties and a better sense of how to find the best breeding pairs.

So go on, get breeding. And good luck! True love awaits in the shining eyes of Miss Purrfect.